‘Aussie fans will travel in numbers to Qatar 2022’

The FIFA World Cup Qatar 2022™ is just a few months away and excitement is building ahead of the first edition of the tournament in the Middle East and Arab world.

Among those looking forward to international football’s showpiece event is Doha-based Australia fan Mitch Scott. The 34-year-old, originally from Melbourne, has lived in Qatar for five years and currently lives in The Pearl.

Events manager Scott believes fans from Australia and globally will love Qatar’s tournament, which will take place from 20 November to 18 December.

What advice would you give to Australia fans travelling to Qatar for the World Cup?

Qatar is very welcoming – so just come and enjoy yourself. You shouldn’t have any concerns – despite how this region is sometimes portrayed in the media. Some people have mentioned the heat to me – but in November and December, it will be very enjoyable.

Australians are known for passionately following their national sports teams. What can we expect from Socceroos fans?

We’re always going to be passionate and we’re going to be loud. You will know that we’re there! Australians love to meet other Australians, wherever you are in the world and whatever you are doing. If someone sees someone wearing green and gold, they’ll spot them out and say ‘g’day mate!’ to them. That won’t be any different here.

You helped organise Australian fans for the June intercontinental play-off against Peru. Tell us about the build-up to the game.
We had a lot of fans come in from all over the world and we also had a big local Australian contingent, so we organised for everyone to have matching shirts, with ‘Australians in Qatar’ written on them. We also organised for a social gathering before the game at an Australian-themed restaurant, as well as another pre-match gathering for families. It was just a great vibe when everyone turned up to the game, as every Australian was wearing green and gold. We told everyone to sit in the same section, so there were good groups of Australians together. 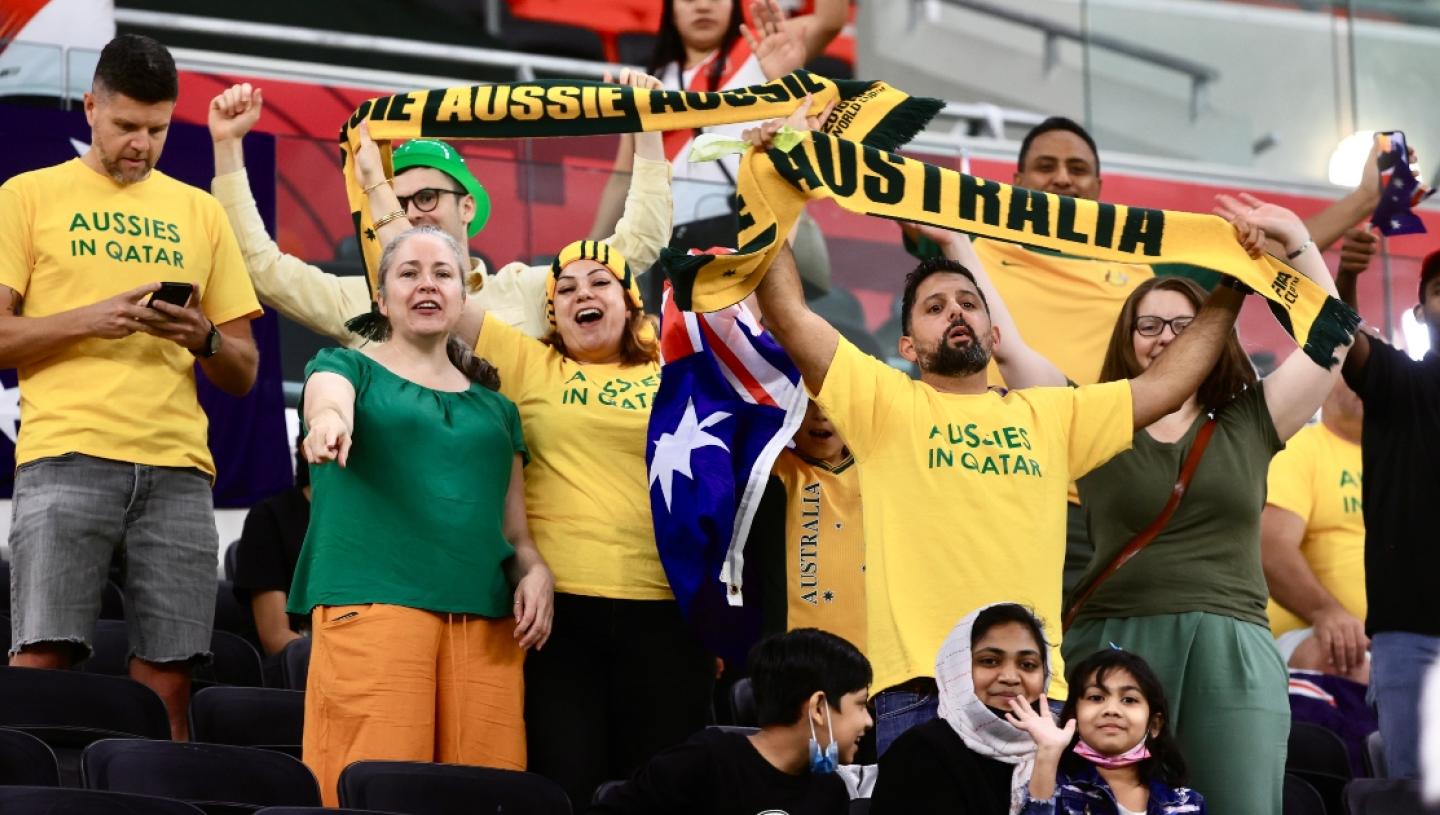 How special was it to experience seeing the Socceroos qualify for Qatar 2022 at Ahmad Bin Ali Stadium?

People say it was special when we qualified for the 2006 World Cup against Uruguay, when there were over 80,000 people at the stadium in Sydney back in 2005. Here, there was a much smaller crowd, but it was just an unbelievable feeling knowing that it was a ‘do or die’ game and that we had to win to qualify. Then it went to a penalty shootout and we were behind the goal where it took place, so it just couldn’t have been any better.

All of Australia’s group matches are taking place at Al Janoub Stadium. Are you excited to see what the atmosphere will be like when the Socceroos face France, Tunisia and Denmark?

How do you think Australia will fare at Qatar 2022? 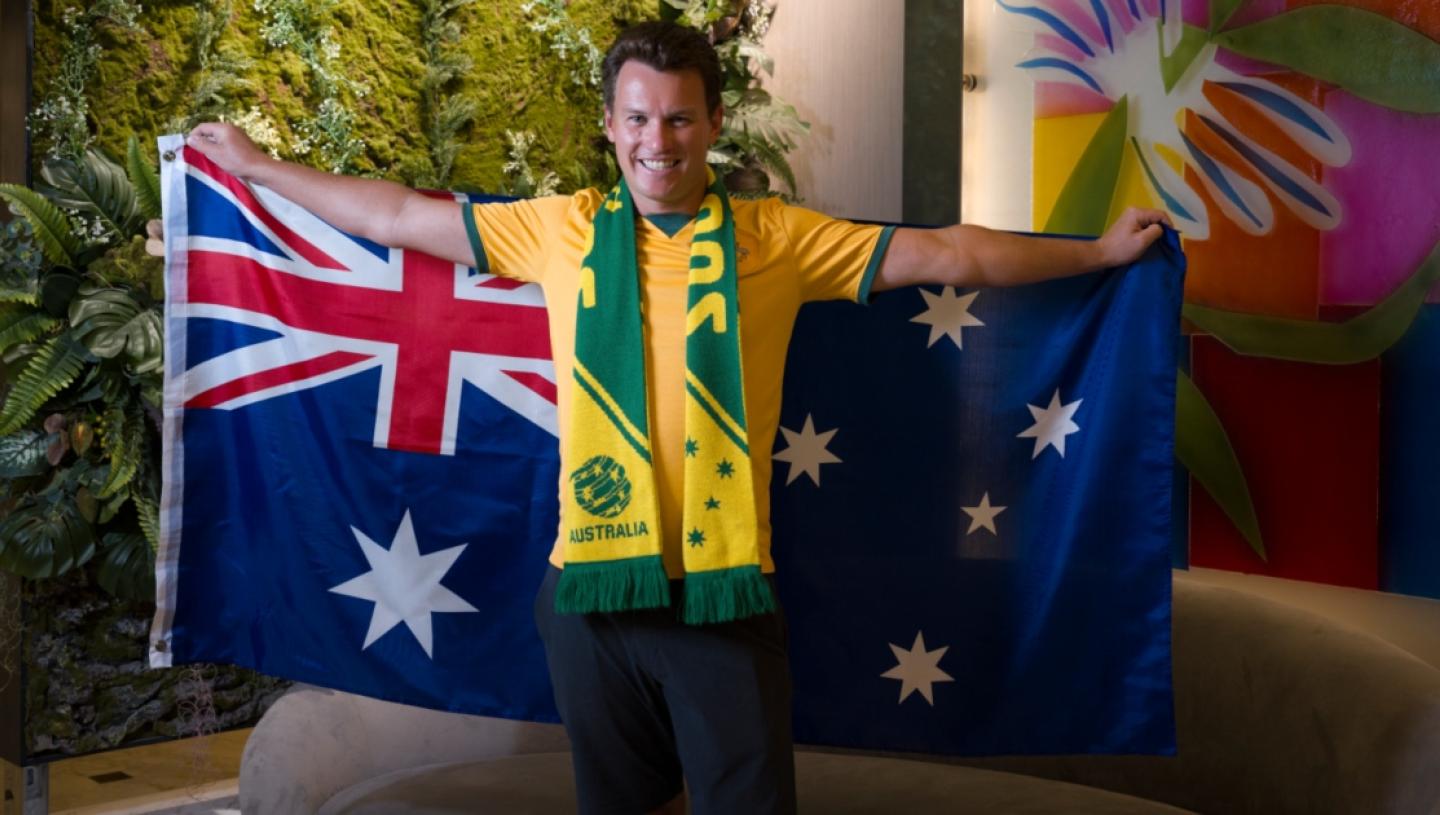 What are some of the interesting things about Qatar that people may not be aware of?

When people arrive, they will notice how clean and new the entire the country is. There is also a friendly, social vibe here. It’s a really great mix of new and old, plus the latest technology. You’ve got people from almost every country in the world living here and that diversity is reflected everywhere you go.

What are your favourite places to visit in Qatar?

I’m a golfer, so I love going to the Doha Golf Club and experiencing the wide-open spaces, plus the trees and wildlife. I also love the National Museum of Qatar. Every time I go there, I learn more about the history of Qatar and what the plans are for the future. I also enjoy going to Souq Waqif and experiencing local culture and the vibe there. You can get lost in the little shops that go on for miles. There’s everything there.

Describe your perfect day in Qatar.

First thing in the morning, head out for a desert safari and take a four-wheel drive down the side of some sand dunes. Then, you come back into Doha and visit the National Museum of Qatar before cruising around the waterfront and taking in the scenery around West Bay. In the evening, you would head to Souq Waqif for dinner. If you felt like going out after that, there are plenty of bars and restaurants that are amazing.