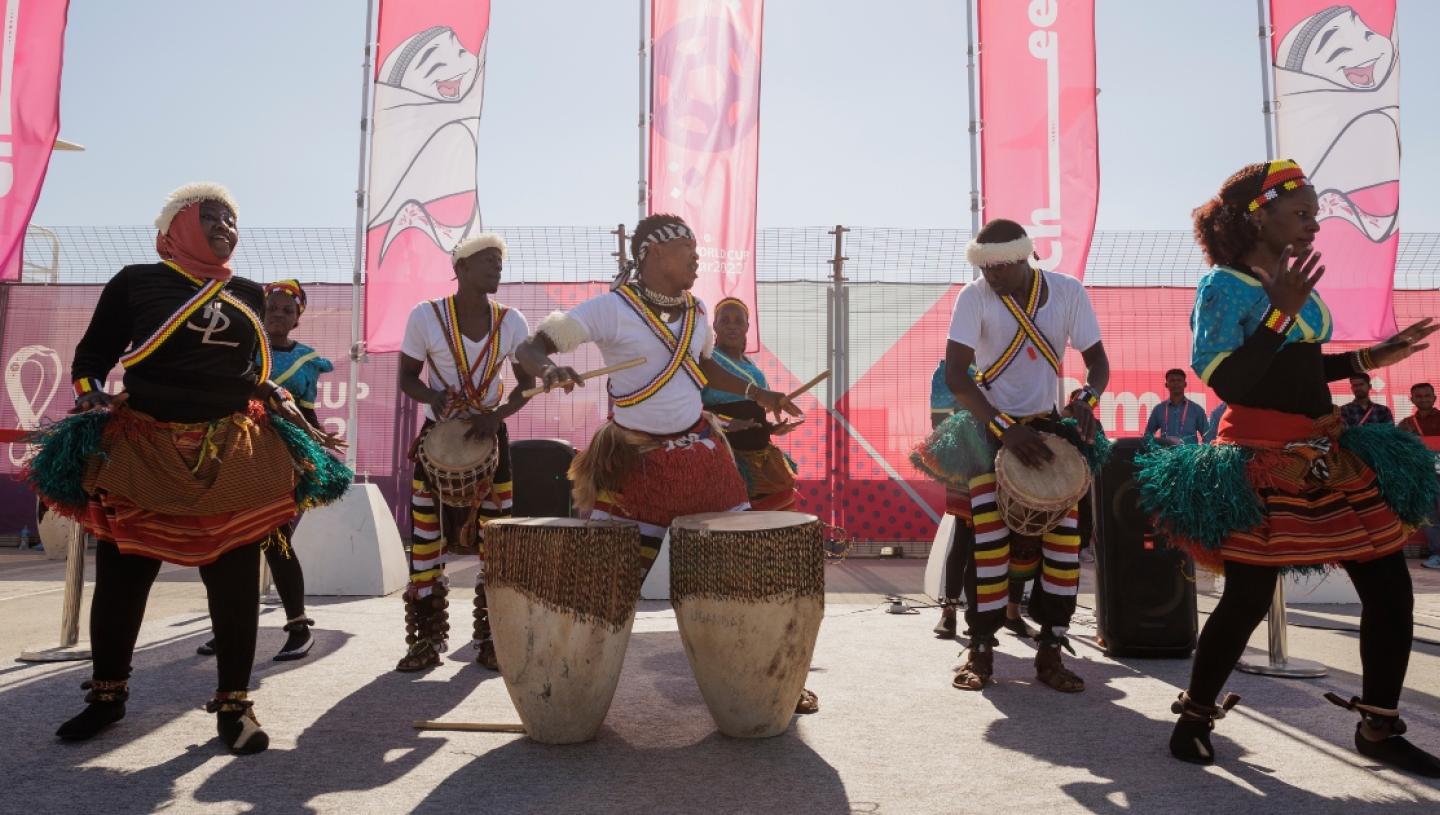 A parade of cultural and entertainment activations delighting thousands of football fans at the FIFA World Cup Qatar 2022™.

Under the Cultural Activation Programme, artists from around the world were invited to support entertainment offerings during Qatar 2022. Selected applicants have had the opportunity to share their unique acts with fans in locations across the country such as, stadium precincts, the FIFA Fan Festival™, the Corniche, fan accommodations and Al Messila Bus Mall.

However, many of the performing groups’ journeys started long before with the Culture and Entertainment Experience programme, as the local communities in Qatar were always part of all of the tournament millstones activations and shared the excitement of preparations among their communities for the big event.

For the Twegate Dance Troupe, a Ugandan community dance and drumming group who have supported events in Qatar for the past six years, performing during the FIFA World Cup is a culmination of years of hard work, passion and dedication.

Led by Richard Otto, the troupe have delivered a series of captivating performances at Al Bayt, Lusail and Khalifa International stadiums, in addition to the FIFA Fan Festival and the Corniche.

Here, we caught up with Otto to find out how their FIFA World Cup journey is taking shape.

How did you start performing at SC events?

Our journey with the SC started six years ago when I was invited by my Kenyan friend to meet someone from the SC’s Community Engagement team. We started brainstorming ideas on how we can represent the Ugandan community in Qatar and during the World Cup. Then more of my Ugandan friends started joining our meetings. We achieved our first milestone with the community forming our own football team! The collaboration continued and we later formed the dance and drumming group. We were able to achieve all of this through capacity building workshops and community programmes.

What is the name of your group and what does it mean?

Our group is called Twegate Dance Troupe. ‘Twegate’ means unity in one of the local languages spoken in Uganda. We wanted the name to represent how the troupe makes us feel and the feeling we want to share with our audiences.

Tell us about your performance and the driving passion behind it.

We do traditional Ugandan performances comprised of dancing and drumming. There are different dances included: the Mwaaga dance performed by people from eastern Uganda, Laraka raka dance that is from north Uganda. The Runyege is from west Uganda. We are delighted to have had the chance to introduce a beautiful side of our culture. That has been our driver from the start – introducing our country and culture to others through music and dance.

What has been your favourite part of the FIFA World Cup so far?

Being able to witness it all happen is already a dream come true. I would say the World Cup has already been a major success. Qatar has united the whole world together no matter their background, all for the love of football. For the troupe, to be able to connect with people from all over the world through our art and culture has been amazing. Interacting with fans from everywhere has been a beautiful spectacle.

Where else have you performed before?

We have performed during the FIFA Club World Cup, the FIFA Arab Cup and stadium inaugurations. The most interesting place we performed at was the ‘100 days to go’ celebrations at the Mall of Qatar. The crowd was great! The World Cup of course has been the biggest, greatest event we have ever been a part of.

What does it mean to you to be representing your country in the FIFA World Cup?

For me, I’ve waited 10 years for this moment and surely it’s a good feeling to finally be here. For us as a group, to be a part of the World Cup entertainment is a great privilege. We feel honoured to be a part of this historic moment. With most of the group members having jobs, we worked tirelessly and coordinated our rehearsal schedule. It is amazing to experience this great interaction between what we are presenting from our culture and the crowds.

My two teams are Qatar and Portugal!